When Bryson DeChambeau reaches into his back pocket for a fourth look at his yardage or green book, I want to drive a ProV1 straight through my TV screen. But then again, the guy did just dominate the U.S. Open, so all that information can’t hurt. In fact, it seems to help quite a bit.

But how can you get a taste of that sweet, sweet data for your home course? I mean, maybe you belong to a swanky private or semi-private club that prints up detailed yardage books. If you play at a daily-fee course or muni, though, you’ll need to measure out your own green maps. Ain’t nobody got time for that, except Bryson.

But now GolfLogix https://www.golflogix.com/ offers green maps and yardage books of nearly any course you can think of. These books run $40 each, include hole maps on 50-yard scales and green break maps and heat maps on 5-yard grids. We’re talking serious data here.

I checked out two of the GolfLogix books, one for Lake of the Woods Golf Course in Mahomet, Illinois (my home course) https://www.golfthelake.com/ and one for Harrison Hills Golf Club  https://www.harrisonhills.com/, a superb public course in Attica, Indiana. These are two courses I know very well, so I thought I’d see if the green maps would help out with some of the tricky reads that abound at both of them. 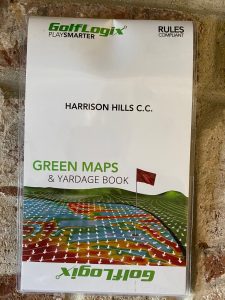 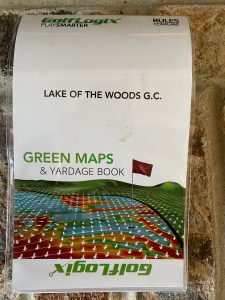 I’ve brought several guests to Lake of the Woods, and nearly every one of them has said that the greens are among the hardest to read they’ve ever played. It’s not that the contours are crazy, or that the greens are wildly tiered or shaped. There are just lots of subtle breaks that often run in multiple directions on any given green. The Sangamon river also runs along the edge of the property, and several holes seem to be affected by the “pull” from the river. I’d always wondered if these quirks were just in my head.

When I opened the GolfLogix green book, though, I soon realized they weren’t. Balls on the 10th hole,for example, always seem to roll faster uphill (toward the river) than downhill. And sure enough, even though the green appears to be canted from back to front, there’s a large flat spot in the middle that does not look flat. So if you’re trying to trickle a putt down from the back of the green toward the front, it hits that flat spot and, well, stops. All those downhill putts that have come up short now make sense! 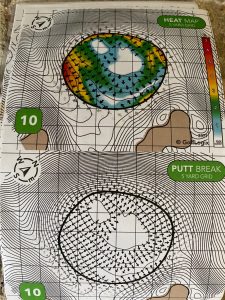 At Harrison Hills, the greens are dramatically contoured, and much faster than at “The Lake.” So if you’re above the hole on some of them, you’ll be lucky to roll any putt within 5 feet. The green at the 400-yard 9th is a great example. The GolfLogix heatmap of the green is deep crimson at the front, meaning a massive false front. From the fairway, though, the 40-yard-deep green looks relatively inviting. But if you land on that false front, your ball will not stay on. And any putts longer than 15 feet will require all your skill, even with the green maps, to get close with all the movement here. 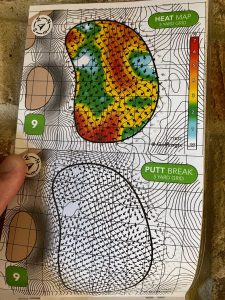 Green 9 at Harrison Hills Golf Course is a wild ride.

It may sound corny, but when I pull one of these detailed folios out of my back pocket, I feel like a “player.” And when I point out that there’s a 3-inch break opposite the direction of every other break on the infamous 7th green of my home course – and then I turn out to be right! – I feel almost as smart as DeChambeau. Almost. 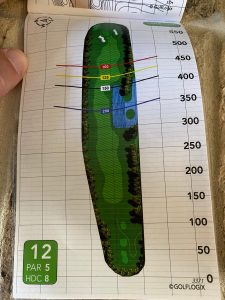 Hole 12 at Lake of the Woods feels like you’re playing down a corridor.